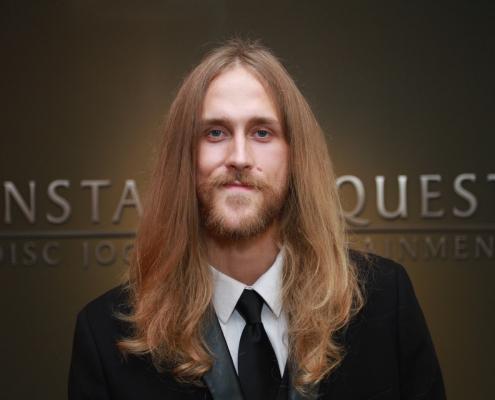 Bret is originally from western WI so he has always known the twin cities as his second home. His love for music started young when he began playing the drums at the age of twelve. At the same age Bret became fascinated with turntables and would listen to old albums. Over the years this turned into a love of old school vinyl scratching and mixing called turntablism. Bret eventually started creating his own music and scratching, playing drums, and providing backup vocals in his band.

Bret is a gear head and while not Djing he works as a camera operator. He has earned Associate’s Degree in Film and Video Production. He also loves most outdoor activities such as skateboarding and kayaking, or projects like working on vehicles and drawing.

Now that Gretchen and I are getting settled in our new home after our wedding and honeymoon, I wanted to let you know how much we appreciated you DJ-ing our wedding at Como Park Zoo.  You truly were one of the best parts of our wedding and are a huge reason we had such a blast at our reception!  You were exactly what we were looking for in a DJ – accommodating to our custom playlist, reading the crowd well, super respectful and professional and we enjoyed seeing you having fun as well!  I hope you could tell that our friends and family appreciated you as well. We can’t thank you enough and we really appreciate you working with us!  I will definitely be recommending you for others in search of an amazing DJ for their event.

We used Instant Request DJ Entertainment for our wedding DJ and we couldn’t be more happy! DJ Bret was very accommodating to our requests and did a great job with our outdoor ceremony despite a bit of rain right before! He was very professional and our guests loved the music he played for us! We definitely recommend Instant Request DJ!

Had an amazing experience with Instant Request…our DJ was Bret Christiansen, he was fabulous! I have never been to a wedding where the dance floor was always full of people dancing throughout the entire wedding dance. I could see him jamming over in the corner when he was building the lists for the next music. He kept the dance floor full, was great at following our requests and announcements, and he is very friendly. Couldn’t have asked for a better DJ experience! He also did the ceremony and it went great, overall 5 stars, he was very flexible with last minute changes that we made, and it flowed very well. Dinner music and pre ceremony music was well picked by him, wouldn’t hesitate to have him again!!

I just wanted to give a shout out to Bret for his excellent service on Saturday night!! He was amazing and really made the night come alive for us! He even agreed to stay extra time. We will definitely pass his name on for Instant Request referrals. Thanks again for the wonderful service! 🎉

We had Bret for our wedding and he was absolutely fantastic! He kept people on the dance floor all night! Bret was also very organized and kept everything on schedule during our big day. I would highly suggest Instant Request and put in a request for Bret as well!

We had Bret C. as our DJ. He was super accommodating to us. I didn’t really get an opportunity to complete my online event planner but Bret helped make it easier on me to get the list of songs to him. He assured me that everything would go smoothly during the day of the wedding. He made sure to mix in a great amount of traditional Hmong music with the other songs. I know all of our guests was appreciative of this. Thanks for playing a huge role in my wedding and making sure all the music went well. I don’t have enough positive words to describe this experience. I would highly recommend Instant Request Entertainment.

Bret Christiansen was a wonderful DJ for our wedding at the Plymouth Creek Center!  He was attentive to our needs and to what the guests were itching to dance to.  He has a fun, upbeat personality that resonated throughout the night and kept the party going!  Instant Request was really easy to work with, and we would recommend it to anyone!

They communicate really quickly and their website is easy to use. Our DJ, Bret, was fantastic. He made sure he understood what we wanted, played a great mix of music and even found a old polka song requested by grandparents. We received so many compliments about him and his service. We highly recommend Bret!!

Thank you so much for DJing our event and keeping the dance floor full all night. We had many compliments on the music! Thank you for being so flexible and willing to help us have the perfect music!

We worked with Bret for our wedding and he was awesome! After filling out our online planner, I chatted with Bret to go over a few details. He was extremely professional, easy-going and fun! He had everyone on the dance floor throughout the night.