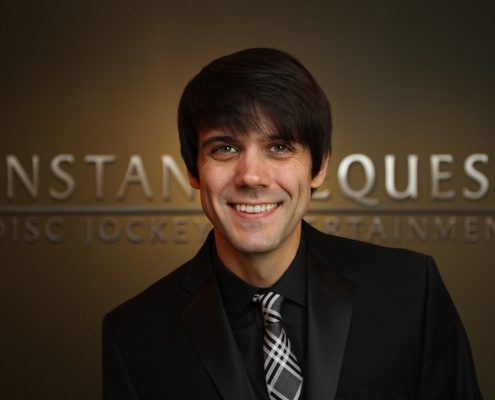 Eric was born and raised right here in the Twin Cities. He has been a local radio DJ for over 15  years working for radio stations like 93x and KQRS. His radio work led him to start helping friends out with weddings, and then his love of live DJing took off. He has worked with Instant Request for nearly a decade and has DJed 100’s of events.

Eric’s journey with music began at an early age when he began playing the guitar. Eric still plays in a successful band whose songs have been featured on blockbuster movie soundtracks. Eric is known for being quick witted and the funny one in the group. When not DJing Eric volunteers regularly, likes baseball, loves live music and spending time with his dog Jasper.

Eric was incredible. We had a family friend sing during our ceremony who’s used to professional rehearsals and staging and he totally bent over backwards to appease her needs. Just the right amount of guidance for guests throughout the night. Couldn’t be happier with his work. Thanks!!

Instant Request did an amazing job for our wedding! They were great at communicating the leading up to the day and we loved the online site to select music and provide details and preferences. We had Eric and he did a great job, was professional and outgoing. Our wedding was beautiful and perfect, and Eric was a great part of that helping everything go smoothly. We highly recommend him and Instant Request!

Eric M was the BEST! He was great to work with prior to the wedding and did an amazing job for the whole wedding (ceremony, social/dinner, and dance). He read the crowd perfectly and kept people dancing all night! Even with a smaller number of people due to COVID, and you could think it could get a bit lame towards the end, it did not, everyone had a BLAST and we danced right up to the last second!

We had Eric M (Black Tie DJ) perform the DJ of our wedding on NYE. He was excellent. He has been DJ’ing for like 10+ years, and could read the crowd very well. We requested that he play the anniversary song for all the married couples. He did. We had a Google Hangout (video chat) before our wedding and discussed overall flow and discussed our wedding playlist profile that Instant Request has you make that has EVERY DETAIL embedded into. Overall, Eric was amazing. Music makes the wedding fun. Our dance floor was packed. Eric was worth way more than the amount that instant request charges (I think we paid $1,050 for him, but his professionalism/demeanor/experience was worth $1,500). Would recommend Eric M to anyone who wants a DJ they can trust won’t play a “Dance Floor Killer” song as Eric described it. Super funny guy! Thanks again Eric!

Instant Request was great to work with! The online event planner tool was super helpful, and they were professional and easy to communicate with. Eric our DJ was awesome!! We had so much fun at our reception and highly recommend him as a DJ!

Eric was the DJ for our wedding and we could not have been more impressed and happy with his work. He was always responsive to our needs in advance of our wedding and took care to make sure the ceremony, cocktail hour, dinner and evening dancing had the songs that we wanted played. He was great in arriving at a tough venue (on an island) and getting setup with plenty of time to spare, and was professional throughout all interactions. Most importantly, he kept the dance floor packed the entire night. Many thanks for such a memorable night!

We worked with DJ Eric M for our wedding in February, 2018. Eric reviewed our online planner and scheduled a time to video chat with us a few weeks before the ceremony. He had great advice and tips for making our reception go as smoothly as possible. On the day of, Eric arrived early to set up and everything was taken care of. The dance floor was literally packed all night. Thanks, Eric!

Eric exceeded our expectations. His professional yet laid back/relax style was perfect for our wedding. He was great at speaking when we needed him to and prepping the guests for dinner, dancing and everything between. He had a great playlist for the wedding and kept people on the dance floor all night! I’d highly recommend him to others.

After lots of consideration, we chose Instant Request for our wedding on June 4, 2016. I love music, but this was the most important part to my husband. We upgraded to the Black Tie DJ and chose DJ Eric M, who also brought a trainee along with him…. I think people throught we were extra fancy because it looked like we had 2 DJs! We had our 1:1 with Eric and went through everything we expected for the ceremony and reception. He very professional and accommodated all of our requests! He made announcements as we needed and was a lot of fun with the music and guests. Everyone was out dancing and having a great time…we had people comment about how they’ve never seen so many people on the dance floor at a wedding! I definitely recommend Instant Request, ask for Eric M!