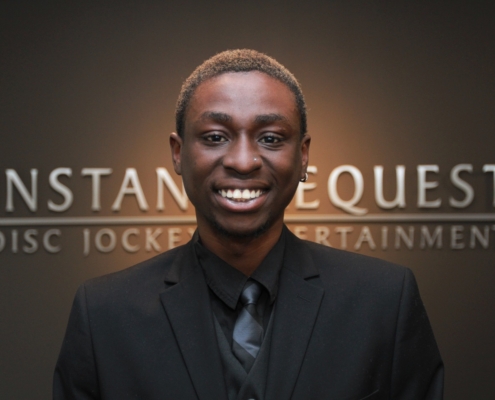 Ian was born in St. Paul but was raised in Atlanta. After highs school he  returned home to the Twin Cities.  He  grew up in a household and family that loved all types of music. It was consistently being played and Ian soon developed a love for all types of music.  He discovered DJing shorty after learning audio editing software. As he began to produce music Ian became intrigued by the idea of live mixing.  Ian Liked the free form aspect of mixing music live and  he soon learned he could keep a dance floor packed. He was hooked. Ian has been engineering  and performing live for about 9 years.

When not not focused on music and DJing, Ian works in the  healthcare field.  Ha also loves being outside in nature and traveling. He loves street art and fashion.

Our DJ Ian was AMAZING. We had so much fun and he kept the dance floor packed. He was easy to work with.

Ian was the best DJ we could have ever hoped for. He was a perfect fit for our style and we would highly recommend him to any and all of our friends.  Ian organized all of our friends and family and helped us stay organized. Thanks for making our wedding night incredible.

We liked Ian. He was easy going and took some of the stress out of the day. He  was organized and had played all the right songs that kept the dance going all night.