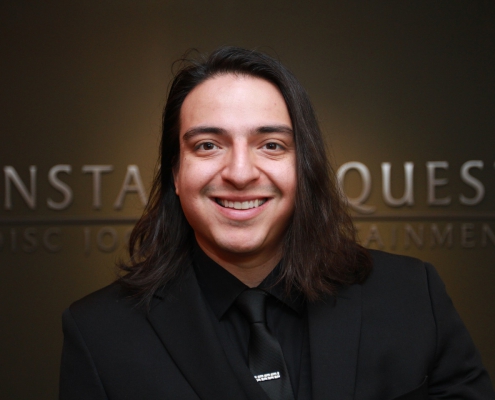 Ray was born in Texas in a Military family. As a result, he had the opportunity to move all over the world. When his dad retired from the service in 2000 he moved to Minnesota to be closer to his family. Ray has always been musically inclined. During college he took guitar and piano classes and began producing music. Today Ray plays guitar, bass, piano, and drums. Producing music started as a hobby but has since become an obsession with Ray. He received his degree in  Audio Production.

Several years ago, Ray and his friends started DJing for fun at parties. Their competitive nature took over and DJing became one of their favorite things to do.

When he is not working on music, Ray usually loves writing scripts, working with video and still cameras, and watching the UFC and the Vikings.

Ray was nothing but excellent, far exceeding our expectations! He is extremely accommodating and his work managing the timeline to ensure our reception went off without a hitch allowed us to relax and enjoy the evening with our friends and family. Ray had a great mix of music and kept the dance floor packed throughout the night. Several guests and our whole bridal party complemented his work. My wife and I highly recommend Ray!

Our DJ was Ray, and he did a FANTASTIC job! He had everyone out on the dance floor all night long and even got out there himself! He was great about communicating both before the big day and during, checking to be sure everything was according to plan and the way we wanted. Our guests couldn’t stop talking about what a great job he did. Would definitely recommend!  I wanted to say thank you SO MUCH for being the DJ at our wedding. You did an awesome job and everyone had so much fun dancing!

Thank you so much for DJing our wedding! It turned out great and we were very happy! Thank you again!

Ray took the time to go through our entire itinerary, and was very prepared come wedding day. He worked with our officiant to make sure the ceremony was heard by all of our guests, and the ceremony cues were spot on. The playlist for the dance was exactly what we asked for, and everyone had a great time.

Ray was attentive and quick to help us announce anything we needed to communicate as well as make sure all of our speeches went off flawlessly. When he said he was going to play all the hits, I never expected the perfect blend of old and new hits that had everyone on the dance floor at least once. Would highly recommend to others.

Nicole and Zachary @ Wilds Golf Club in Prior Lake

Had Raymond Bell as a DJ for my wedding and he was wonderful! Ray was professional and worked hard to make sure our day ran smoothly. Every time a song played Ray would be interacting and having a good time with the crowd, all while playing great songs!

Ray was absolutely amazing! He kept our reception flowing and reminded us on timing so we could fit all of our activities in! He showed up on time and had everything set up before guests arrived and didn’t bother the bride or wedding party! He just did his thing and made sure he was prepared. His good attitude was contagious and we are so thankful we had him and decided on Instant Request for our wedding DJ! 100% recommend!

Our DJ was Ray and he was amazing! We had a great experience using Instant Request DJ services. Throughout the process of booking and lead up to our wedding they were very quick to respond. We had a phone consult with our DJ prior to the event and he was very courteous and took what we wanted seriously. The day of our wedding, our DJ, Ray, kept the dance floor busy the ENTIRE dance. We had so many compliments on our DJ. We would definitely recommend Instant Request and Ray to anyone!  Our friends and family were dancing all night. Highly recommend Instant Request, very easy to deal with and stress free.

Our original DJ was unable to make it to our wedding due to a medical emergency. When we got the phone call, as expected I was nervous, but before I could really get panicky I saw our new DJ, Ray, setting up. I cannot say enough wonderful things about Ray. Not only did he figure out what our requests were (some were last minute changes we had arranged with our original DJ) but Ray was also fun to work with, easy going and I could tell he truly enjoys working as a DJ.   He had minimal time prepare but nailed what I was hoping for. My boss mentioned to me that our DJ seemed very fun and he loved the music choices.   So thank you to Ray for saving our day and Instant Request for making it such a stress free transition. I couldn’t speak more highly of your company and of Ray!

The DJ was phenomenal and brought the event together. He was professional and accommodating.

Ray was great. Very friendly and kept the party going.