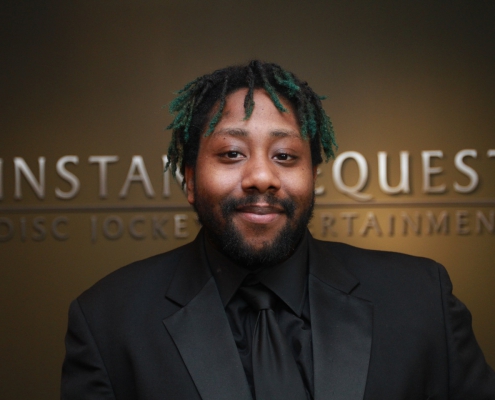 Bryant is originally from Mississippi but has lived in Minnesota for the 2nd half of his life. He spent the first half in South Carolina.  Bryant is a student of music and loves to study the history of many American genres.  Bryant has surrounded himself with music his entire life. From listening to music in on road trips to me singing at and hosting karaoke nights. Bryant started DJing as a highschooler but did not become a professional till later.

Bryant works as a CPR assistant and when not DJing he is an avid gamer. He shows off his skills on his twitch stream which has a good following.

He is a huge Green Bay Packers fan and loves watching the NBA and the LA Lakers.

Highly recommend Instant Request DJ! The online process was a breeze – from the payment portal to creating our own playlist. We lucked out with our DJ Bryant! He was so professional and super easy to work with. We had a little snafu with the timing of our toasts (100% on us!!) and Bryant handled it so well, his willingness to go with the flow was wonderful. Dance floor was packed all night! I cannot recommend Instant Request enough.

Bryant with Instant Request was an amazing DJ! He knew the exact style of music we wanted during the entire night. He accommodated all of our “must play” songs, and kept our guests on the dance floor with his music mix.  He was great to be around and we knew he had everything under control the night of our wedding. The online music planner program was easy to use and helped us plan all the music we needed.  I HIGHLY recommend Instant Request and Bryant!

I wanted to thank you for all your help and Bryant for his performance. He was amazing!  Not only did he keep the dance floor packed, but I felt so comfortable with his music selections I told him to scrap our must plays  and just keep the flow going, which he did! If I am ever planning an event like this again, Instant Request would be my first call. Bryant was better than I hoped and help make our night memorable.

The process with Instant Request was super easy with the online planner, and the DJ we got assigned to us was a perfect match! Bryant Shelby was our DJ, and he is so good at what he does! He made every effort to get our guests out on the dance floor, including getting out there and dancing himself! He was very accommodating to song requests throughout the night, and was a great hype man for a more shy group of people. We got so many compliments on him throughout the night. I cannot recommend him enough!

I just want to share with you how much we loved our DJ Bryant. He made our wedding 20x times better, more fun, and lively. We would recommend him to all of our friends. Thank you for pairing us with him

Instant request was a really fantastic vendor to work with. When we were planning for the wedding Mitch was incredible at answering our questions very quickly. The online event planner was very thorough and easy to use to pick what songs that we wanted played, what kind of DJ we preferred, and what events we wanted to happen during the ceremony and reception. We ended up working with DJ Bryant and we have nothing but praise for him. We spoke with him shortly before the wedding to go through everything and he was very easy to talk to and work with. The day of the wedding, he was incredible! He was able to interact with and get all of our guests out on the dance floor. He even went so far as to get on the dance floor himself! We would 100% recommend Instant Request to any couples looking for a DJ service.

We had Bryant with Instant Request for our wedding DJ. He did a great job with the music selections and was such a fun presence! We had provided a lot of requested songs and the added selections fit right in with ours and the preferences of our guests! The dance floor was lively all night including right up to when the dance floor closed – just what we wanted!
Also, he did really good with the volume levels for the ceremony, cocktail hour and dinner, and then the dance portion. Their online portal to add songs worked well, they have a large selection of music available and are happy to add songs too. The dance floor lighting was great as well!

Bryant Shelby was seriously THE BEST! Thank you Instant Request for matching us perfectly with the best DJ. Everything went so smoothly!

Alexis and Ryan @ Mill Site - Events on the River

100% recommend! Our DJ Bryant Shelby was AMAZING!!!! I have never seen a better DJ anywhere else until our wedding! He was so attentive to the crowd , great sense of humor, and very personable! Not to mention Hilarious!