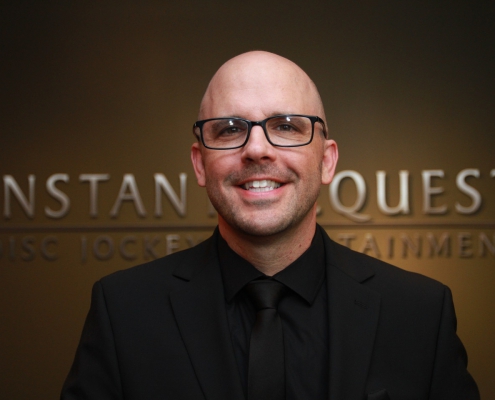 Danny grew up on a small ranch in East TX.  He moved to Nebraska where he lived much of his adult life.  Now he calls  MN home. He started DJing when he got volunteered into doing it for his work’s office party. It was a party bus that ended with a Concert.  He plugged in and selected tunes all night on the bus.  They had such a good time that he was hooked.  Soon after Danny purchased Dj gear and started Ding a series of private parties. After a referral by a photographer he started DJing Weddings. That was over a decade ago and he has not looked back.  Danny Has DJed 100’s of events over the years while in NE and MN.

During the day, Danny works in businesses sales. He is also a family man and enjoys spending time with his wife and Kids.  Some of his children are learning the bass and drums. Danny’s basement is now center stage for his family Jam band.

Danny was an amazing DJ! He matched our vibes from the first time we chatted with him and did an absolutely amazing job during our wedding! Danny went far beyond what we expected. We had some set backs with our music and Danny saved the day! He got it all up and running and on track for the ceremony without me (the bride) even knowing that there were any problems. I probably would have been panicking if it weren’t for Danny! He got our song list and had the ceremony up and running in no time! He did a great job playing all of our music, matching the vibes and was all around an awesome guy. We had an absolutely wonderful day and Danny did an awesome job making sure of that. I am so appreciative of all the extra work he put in for us. We Couldn’t have asked for a better DJ!

They did an awesome job with our wedding! Their event planner was super easy to use and they made it a very customized experience and are willing to do whatever it takes to make your event special! Would definitely recommend using them for your wedding!

I chose Instant Request based off recommendation and decided to have the company assign us a DJ. This is where Danny came in! He was funny, respectful and promised to keep the party going, which was important to us for our wedding. We met him virtually prior to our event and we were able to communicate our needs and wants. He was able to provide mics and speakers from the time of the ceremony through cocktail hour and dinner and dancing and it all went off without a hitch.

Danny did such an amazing job. He worked with us in advance of our event, set up lights for our event, and did a fantastic job as our DJ. He was fun, professional, and so good!

DJ Danny did a great job keeping the energy up on the dance floor and maintained open communication with the guests and the couple!  Things were great and we’d recommend him and Instant Request to our friends!

We had Danny for our September 10, 2022 wedding and he did an absolutely amazing job! The entire planning process was so easy and streamlined with Instant Request as well. We highly recommend them to anyone looking for a DJ.

Our DJ was awesome. Music was always at the perfect volume and tailored the music to the crowd dancing. Would 100% recommend!

Don’t even think twice about this one. Absolutely the best DJ and service I could have asked for. Incredibly detail oriented and made my husband and I feel like everything was completely under control so we could enjoy ourselves. They worked great with our venue staff and really knew how to throw a great party!

Thank you! Thank you! Thank you! Danny did a fabulous job providing music and entertainment at our weekend wedding. The song selections were spot on, volume was ear and conversation pleasing, order of events were prefect, and his  ability to keep the dance floor full was great. We were so pleased we would highly recommend him to any couple looking for an awesome dance or party!

Thank you! Thank you! Thank you! Danny did a fabulous job providing music and entertainment at our weekend wedding. The song selections were spot on, volume was ear and conversation pleasing, order of events were prefect, and his  ability to keep the dance floor full was great. We were so pleased we would highly recommend him to any couple looking for an awesome dance or party!