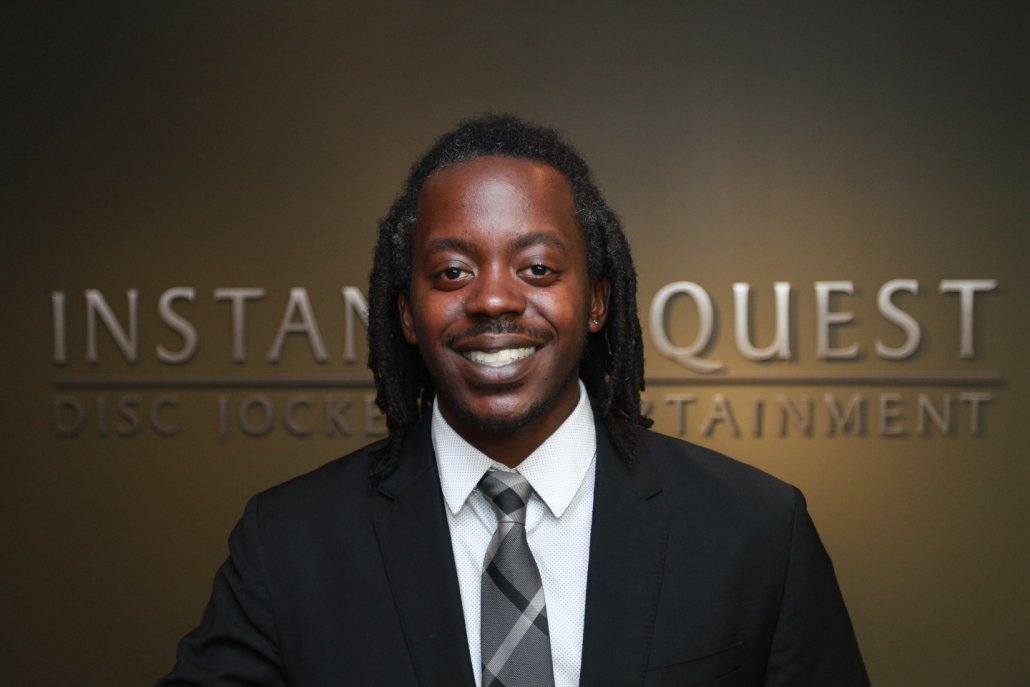 Dimitrius was born and raised in Minneapolis.  At 13 years old, he got in trouble at school for a song he wrote. Although he thought his mom was going to punish him, she took him to her friend’s house.  Her son was a big Minnesota rapper. He took Dimitrius into the  recording studio and since then he has never left. He started his career as a hip hop artist by releasing mix tapes in 2006. He eventually created his own label and released multiple singles and albums.  He has toured across the county and has pressed his own vinyl LP. He began DJing weddings while on tour promoting albums. He has DJed over 50 Weddings and performed at 100’s of Hip Hop Shows. Dimitrius also works as a Freelance Graphic Designer.

When not DJing Dimitrius like following professional martial arts, watching the Vikings, and playing pool.

Dimitrius Stephens was our DJ, and we are not exaggerating when we say he was the most thoughtful, helpful, fun and engaging DJ we could have imagined. Not only did he CRUSH it, but he also dropped by to say hello and congratulate us, made friendly conversation with guests (young and old!), and even helped us clean up the venue! He was wonderful and the entire experience was SO easy. Thank You Instant Request!

Our wedding DJ was Dimitrius, and he did an amazing job for us! He was so attentive to our timeline, and consistently kept us updated throughout the night on what was coming next. I could tell he was giving us 110% effort from start to finish. We were pretty picky with our playlist and Dimitrius did a great job of making the music flow and keeping guests on the dance floor up until the last song. I can’t speak highly enough of Dimitrius, he made us feel so comfortable and confident throughout our entire reception. We would definitely recommend Dimitrius, and Instant Request to other couples.

Dimitrius recently DJ’d for our wedding. I could not be happier with the quality of the music he chose! Everything from the dinner music to the dance music was great! He played many of the songs we requested and was able to feel the mood of the crowd for he rest! He was a great people person and I highly recommend him to anyone else who is looking for a DJ for their special day.

Our DJ Dimitrius was so good! All my guests made comments on how much they liked the songs and the DJ. I would highly recommend Instant Request and Dimitrius !

Our DJ, Dimitrius, was beyond incredible! He continued to check in on us (bride and groom) throughout the day to ensure we were having a good time. He asked us ahead of time if there were specific songs we just HAD to be on the dance floor for, so he would coordinate the playlist around when we were available. Dimitrius even offered to help tear down/clean up at the end of the night! Our entire experience with Instant Request was effortless, and we really enjoyed being able to personalize our playlist for every aspect of our wedding day. Highly recommend!

We worked with Dimitrius for our wedding and he was AMAZING. He checked in with us throughout the night regarding our timeline and if there was anything he could do to make the experience better. There was not a single song all night that the dance floor was empty. Our guests had so much fun! We had a few obscure songs we wanted to use during the first dances, and it was no problem, Instant Request obtained the songs so we got our preferred songs. I highly recommend using this company and asking for Dimitrius!

We had the MOST AMAZING DJ. D, he was awesome he made our day so fun! All of our guests enjoyed the music and the energy he brought. He constantly was checking in with us to see if we needed anything or ask how it was going. He is so kind and caring and he really paid attention to our wants and needs. I can’t recommend D enough he was the perfect DJ for our event!

D was the best DJ we could have asked for — accommodating, thoughtful, and got people on the dance floor the entire reception. We had the best experience.

Dimitrius was assigned to our wedding and we got so SO lucky. He was so kind and involved in our day and really made everything perfect. He spent time learning about us as a couple and encouraged our guests to make suggestions on music. We have heard nothing but positive feedback from our guests, and that is because of Dimitrius He made sure that everything went so smoothly and according to plan and he was so kind the entire day. He wrote us a little note expressing his gratitude for including him in our day and included some words of advice, and we are so thankful to have gotten to have Dimitrius at our wedding! He was great!

Instant request was amazing! It’s great you can request songs online very easily and can edit when you think of a good song. Our DJ Dimitrius was super chill and did an amazing job feeling the crowd at our wedding.

We absolutely loved working with Dimitrius at Instant Request! The dance floor was full all night and he was so accommodating and checked in with us throughout the night. I would recommend him, and Instant Request, to anyone looking for a DJ!

Best decision we made. We were assigned to Dimitrius as our DJ and he was the absolute best DJ we could have ever asked for! Leading up to the wedding day, he was so good about communicating with us and making sure that we got what we wanted. For example, one night he reached out to us asking us if a guest requested a certain song or two, would we want him to play it – which we so appreciated. During the wedding, our dance floor was packed until the very end and our guests loved him! The few songs that were on our “must play” playlist, he made sure to find us so that we could be on the dance floor for those songs! He also would come to us if guests requested certain songs and if it was okay to play them, as well as shared the final last few songs before the end of the night and if there were any last songs we wanted him to play. He was a dream DJ. We received so many compliments – even my MIL took his business card to share with her friends looking for a DJ for their kid’s wedding. 10000000% recommend Instant Request and Dimitrius ! You won’t regret it!!

Dimitrius was more than we could have expected… He did an amazing job communicating with us throughout the entire evening and gauged the crowd nice. You can tell this guy has a passion for the industry! 5 stars and would recommend him for all events. He made this process stress free on our wedding day.