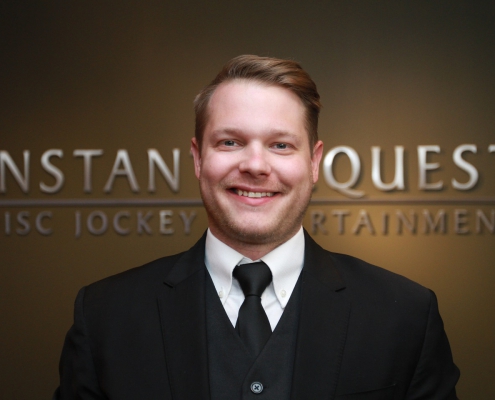 Kyle is originally from Eau Claire, WI and has always had a passion and involvement in music. He has been performing live with bands for over 15 years. His career highlights include having gone on 11 national tours, being featured on MTV and on a handful of television shows, and performing  at Webster Hall in New York City. A former band of his was selected to preform at both the NAMM conference in LA and CMJ Festival in Brooklyn. They also had a song chart #8 in Alternative/Pop! Kyle actively preforms live and also produces and writes for many Musicians. While out on his many tours Kyle picked up DJing and started performing at weddings and clubs.

When Kyle takes a break from music, he finds time to watch films, hike outdoors, and enjoy some craft beers.

After looking through reviews online, which were also in a reasonable price range, my husband and I landed on Instant Request. We could not have been happier with our choice! From the start of our planning, Instant Request was very quick to reply & clear about the quotes. They also sent us frequent reminders on information & deadlines needed for the wedding day.

And wow, DJ Kyle was sooooo amazing!! We had so many guests come up to us and say things like “best wedding DJ ever!” We had a mix of older & young adults but the music was just perfect all night! Kyle definitely read the crowd & played songs that kept people on the dance floor all night. We seriously had so much fun!!! Thank you for making our night so amazing & special!

Kyle did a great job engaging our quests and knew when to transition to other songs to keep the dancing going. He also did a good job keeping with our schedule and keeping us informed of when we would be doing certain dances throughout the night.  He was very attentive and the dance was great. We received many compliments after our reception.

We were fortunate to have Kyle be our DJ from Instant Request DJ Services. He did a great job keeping the party going and playing songs that our crowd appreciated! The dance floor may not have been full at all times but I noticed people were dancing and enjoying the music through out the entire dining hall!

Their online planner was very easy to use and engaged us so we did not miss one thing with planning the entertainment portion of the celebration!

We were very happy with Instant Request and our DJ. Everything ran smoothly and we had a great dance. We will thrilled with how our wedding turned out!

Kyle was everything! He really set the mood for the night and read the room very well – His energy is awesome! I would highly suggest Kyle for anyone’s wedding!

Kyle Culver did an amazing job at our wedding! We loved the experience with Instant Request DJ. WOULD DEFINITELY RECOMMEND!

We can’t recommend Instant Request enough because we got to work with DJ Kyle. He was exactly the vibe we wanted for our wedding. He tried to play every song we had on our must play list (which was way longer than our reception even was-haha) and he was spinning as a real DJ, not just pressing play and pause and letting songs play start to finish. Our dance floor was packed all night. We had a few special requests with using live music for our first dance and having to have a last minute virtual speech from our best friend who had COVID, and Kyle did everything possible to make those special pieces happen perfectly. We are so happy we got to work with Kyle. And the online system for adding all our requests and info worked so well.

Instant Request DJ’ed our wedding and they were great. Very professional and made it easy for us to pick songs to play that evening. Would recommend for any wedding!

From the equipment to the DJ’s shoes, everything was as professional as it could be. Kyle was the DJ assigned to our wedding and definitely went above and beyond to make sure our day was perfect. 10/10 would use again!

If you’re looking for a lit dance floor- look no further. We hired Kyle Culver through Instant Request and couldn’t be happier. Thank you for making our day- our guests and us had a blast!