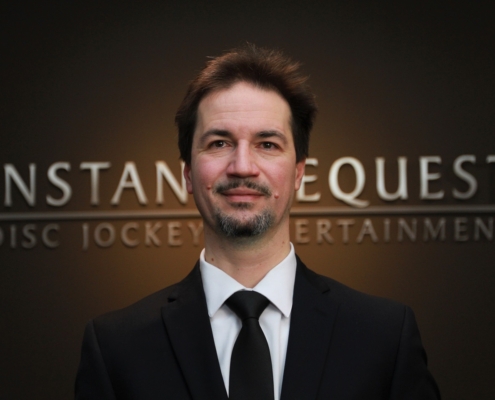 Momchil discovered his passion for music from an early age. His uncle was the front-man of a rock band and who regularly took him to rehearsals. There he fell in love with the creative process and atmosphere, and soon learned how to play guitar and mix music. After college Momchil became fascinated with Latin music and dance.  He started working with a dance studio and became their top instructor.  Eventually,  he started teaching in his own studio and in 2007 he was invited to teach at the annual Chicago International Salsa Congress.  Since then he has become a recognized Latin dance teacher in the Twin Cities. Over the past 15 years Momchil has DJed many events and weddings. He loves all genres and styles of music from pop, RnB, and rap. He also is very knowledgeable about Latin & International Music.

In his free time Momchil likes skiing, martial arts, social dancing, drawing, and spending time outdoors.  Momchil is fluent in many eastern European languages including Bulgarian, Russian, and Serbian to name a few. He also is conversational in Spanish.

Working with Instant Request was great. Although our original DJ was reassigned, they provided us with a great DJ,  Momchil. We had a  phone consultation the Wednesday before our Saturday wedding so I was a little nervous that he would know what we were looking for. However, we were so impressed the day-of and he understood our music style and preferences even with so little time to prepare! Our first dance started at 7:30 and then everyone danced till midnight. He played over 4 hours of non-stop music and kept everyone dancing all night! We were happily surprised.

We booked Instant Request for our wedding and then had to reschedule because of COIVD. They made rescheduling very easy and stress free.  Theon line planning tool was simple. We had a good phone call with our DJ the before our wedding to finalize the details of the day. Our DJ did a great job keeping people on the dance floor, helping keep the timeline on track, and making any announcements that we requested. Overall a great night!