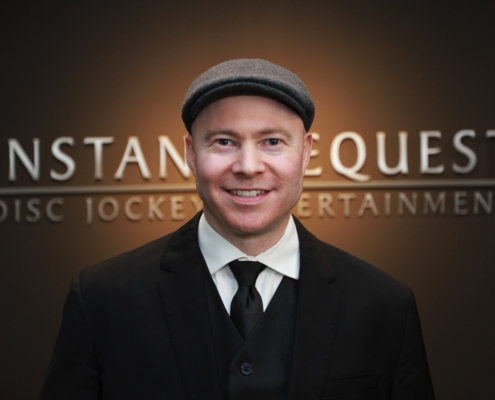 Originally from Montana,  Stephen moved to Minnesota to attend music school. He studied and received a degree in Audio Engineering & Production. During and after school Stephen started producing EDM and Hip Hop music. He soon found himself falling in love with the feel and sound of vinyl records. This started his journey of becoming a DJ but learning to master old school vinyl mixing. Stephen loves to scratch the old school way and has stacks of ruined LPs to prove it. Stephen has been DJing for more then 10 years and has done over a 100 events and weddings.

During the week Stephen is a Marketing consultant. When not DJing or working Stephen loves collecting records, writing, and finding time for yoga. He also loves cheering for the Vikings. Skol!

Steven was incredible! He arrived early and took care of everything to make sure it was ready for our reception. He was flexible and really fun to plan a playlist with. I highly recommended Instant Request, especially Steven!

Stephen was our DJ for our wedding at our home in Wayzata. We all thought he did an outstanding job! He was fun and easy to work with. He paid attention to our needs and specifics of what we wanted to happen. While we were very specific about what we wanted, Stephen provided some recommendations and even changes that absolutely made the music better. Without question, Stephen gets a Top Score! The number of attendees who have been raving about the music and dancing makes my wife and I both smile! Thanks Instant Request!

Stephen was awesome! He read the room well and kept the dance floor going all night. He also listened to our thank you speech which quoted a song and played the song immediately after.  Super thoughtful and intuitive. The dance was a priority to us and that’s why we went with Instant Request. They gave us peace of mind and had an excellent party!

Instant Request helped make our wedding day magical! They are super responsive and super easy to work with. DJ Stephen was awesome – he added energy to our wedding without “taking over”. Lastly – Instant Request’s online tool is made it super easy. It walks you through your whole wedding program and has a full playlist of every song in the universe. HIGHLY RECOMMEND

This company has awesome communication!! They kept us up to date all of the way through till the day of our wedding. Stephen our DJ was awesome! Listened and adjusted as needed. He kept the dance floor full! When the sound wasn’t getting to the back room he came up with a perfect solution. I can’t thank him enough for making our experience great from ceremony to reception!! Truly amazing service!!

Instant Request is the ONLY way to go when hiring a wedding DJ! Their team is so well-equipped to run a flawless wedding! I work with them often as an assistant wedding planner, so I have seen their great work time and time again at weddings with different DJ’s they employ, and I have NEVER seen a bad outcome. I knew I wanted them to work my own wedding this past October, and I was paired with Stephen Wayne who was phenomenal. He was so easy to communicate with prior to the wedding, and day-off he was so efficient, kind and fun. Our guests loved him and he was so understanding even when our venue was having a power supply issue which disrupted his services. Highly recommend Stephen and the whole Instant Request team!