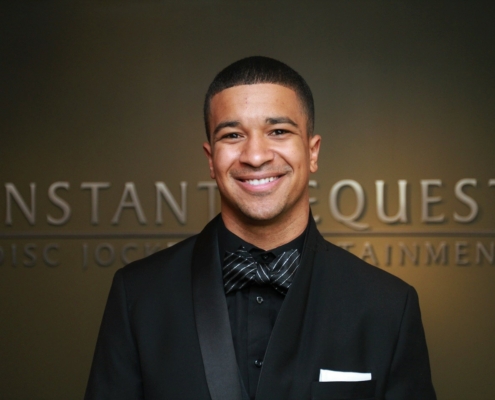 Tevin has lived all over the Northern Midwest. He was born Osceola WI, played football at NDSU, and finally moved to the Twin Cities.  Tevin has always had a large love of music.  He was always selected the resident locker room DJ for every football team he played on. Tevin was drawn to the technical aspect of music and audio. He started DJing, built small studio spaces for musicians, learned audio editing software, and got interested in podcasting technology years ago. Tevin owns his own business. It is a podcast and live-streaming studio in NE Minneapolis. He spends his time working with his clients helping produce and stream podcasts and TV shows.

Tevin is also a huge fan of comedy. He managed a comedy club for 7 years. When not DJing, he loves cooking, working out, watching the Vikings and spending time with his puppy named Prince.

Tevin was absolutely amazing. Our call with him went really well. We were able to share our wishes and he absolutely met them. He was great at reading the room, mixing the music to maximize our dance time, and really kept the party going

This DJ service was perfect! Tevin was amazing and even when we changed up a few things last minute he made everything run smoothly! Highly recommend.

Working with Instant Request was great for our wedding day. We booked a year in advance and never had second thoughts and everything went very smoothly on the day of. Tevin was a fantastic DJ for us. He was great with taking requests and playing music that was perfect for the environment. We would highly recommend Instant Request!

Instant Request matched us perfectly with a Dj. He kept the party going and people were on the dance floor all night long! He kindly took some requests and interacted with our family and friends! We had a great experience and are very happy we went with Instant Request!

The online event planner was extremely helpful – I think this helped my fiancé and I pin down what we wanted our reception atmosphere to feel like, and helped us get comfortable we were on the same page with our DJ. Tevin was awesome.  He read our crowd perfectly, and kept everyone on the dance floor all night. The sound was great. I love how he helped make sure the event was a success for everyone. The online planner helped me get comfortable you knew what you were talking about and that we were all on the same page.

Kristin and Shane @ Holiday Inn and Suites in Lake Elmo

My husband (!!) and I had Tevin as our DJ, and commented at several points both during and after the event how impressed we were with his skill, professionalism, and flexibility throughout our event. He maintained a fantastic atmosphere during the dance portions of the event, and managed our reception’s logistics to an exceptional level (which was utterly relieving to us both!). Our wedding would not have gone as perfectly as it did if it weren’t for Tevin’s tremendous skill as a DJ and facilitator. Thank you, Tevin and Instant Request!

We used this service for our wedding at Interlachen Country Club. The DJ matching process was great, and the service was very professional. The extent of options and ability to customize the entire music selection for the event was a very nice feature. Tevin was great and did a very good job. Our guests were entertained and had a great time!

Tevin (our DJ) was incredible. Super friendly, super nice and super professional. I would recommend to anyone planning a wedding. Instant Request DJ Entertainment is the way to go and would be the only service I would recommend. Thank you!

Instant Request was great to work with! They also matched us with DJ, Tevin who was awesome! Also great price for the amazing experience! Loved our wedding music during 2021!

Tevin was great! Very professional, made things easy on us as the bride and groom. Did everything we asked and more! Was excellent at reading the crowd, taking and playing requests and keeping everyone on the dance floor and enjoy the night! Excellent service!!

Tevin and Instant Request were awesome!!! The dance floor was packed ALL night and Tevin knew just what to play to get the dancing started. Our guests had a great time and we recommend this company to anyone who asks!

Instant request was easy to work with! They responded to emails promptly, encouraged questions and were very affordable! Tevin was our DJ and he was very professional, checked in with us and made sure to read the dance the floor in regards to music selection.

We’ve used Instant DJ for years for our annual holiday party and have always been pleased. Professional, competent and easy to work with. Highly Recommend.

Honestly Tevin was everything I needed in a DJ. I told him the vibe that I was going for and that I wanted it to be a dance party. Let me tell you I have never been to a wedding that the dance floor was so packed. He was great and I have no complaints !

We had such a great experience with Instant Request! Our DJ (Tevin) was very professional and great to work with. Highly recommend this company!

Our DJ Tevin was great! We had a long list of songs that were very widespread in artists and genres and Tevin did a great job of playing all of it.He also stayed an extra 1/2 hour with just a moments notice and we appreciated that very much!

Nothing but great things to say about Instant Request! Tevin was playing great songs all night that appealed to a wide variety of ages in the wedding crowd. Highly recommend!